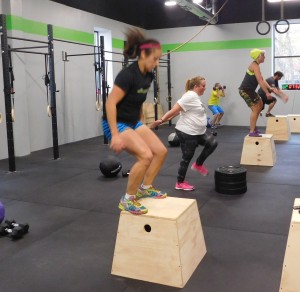 I can’t wait to continue on with full Crossfit and see how much more I can improve not only my running but my overall fitness. I highly recommend this program to anyone!

I considered myself a pretty fit individual when I came into Hybrid Farm’s Project Origin.  I was running anywhere between 10-16 miles on the weekends, played competitive bar league volleyball three days a week, had a standup desk at work, regularly mud/obstacle raced, and tried to do a little P90X when I got the chance.

I even wrote Coach Rob an email wondering if Project Origin would be hard enough before deciding to take the leap.  My eating habits left something to be desired, but it wasn’t awful and although I wanted to lose 10 pounds, I certainly wouldn’t say I was overweight. But, on the first day of Project Origin when we tested in, I was pretty smoked after eight minutes, but also pumped because I could see that I had a long way to go!
Over the next six weeks, I made it to every class and loved every workout.  I followed the recommended diet plan, and at week four, friends and coworkers started asking me what I was doing differently because they were noticing the weight coming off! I ended up losing over two inches on each of the three body parts that we measured- hips, abdomen, and arms.
But the best part was the Saturday after Project Origin officially ended, when I ran the Whistlestop Half Marathon.  I had noticed about three weeks prior that the weekend long runs were starting to seem really easy… and fast!  I kind of thought that I might set a PR (personal record), and that it might be by as much as 5 minutes.  Well… I didn’t.  I crushed my six year old PR by over 8 minutes!
I don’t think that it was really that I was so much more fit with respect to your typical running muscles or cardio.  I’m convinced that the upper body and core strength training, along with the lower body mobility work, allowed me to hold better form with a greater range of motion that made my running much more efficient and therefore faster.  I took 20 minutes off of a half marathon time I ran 5 months previously, and was in pure shock when I saw my time as I crossed the finish line.